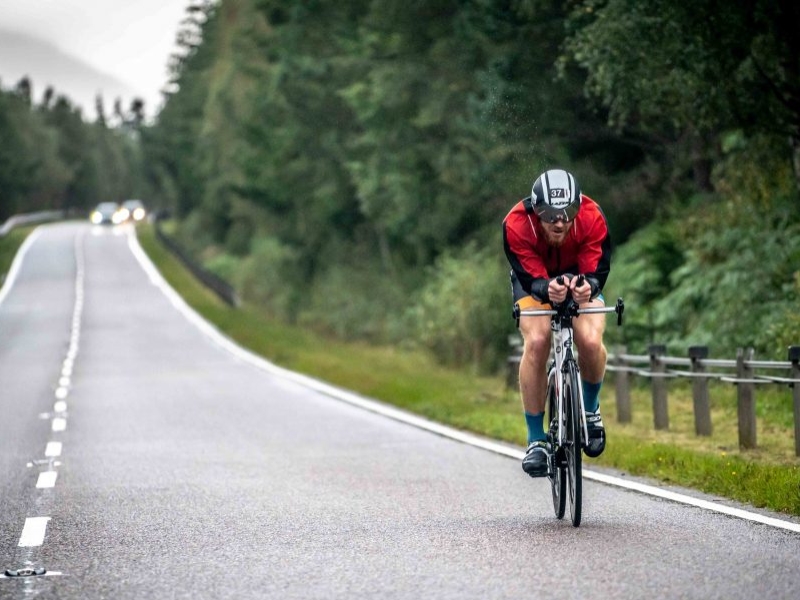 Posted on: October 7th, 2019 by Emma Knight No Comments

Weather and ‘demons’ prove no match for Intrinsic ‘Bravehearts’

It takes more than wet and wild weather to throw Team Intrinsic triathlete Matthew Cox off track. The Intrinsic FE-sponsored athlete battled the elements to add to a string of late season successes with a fourth at the Ben Nevis Triathlon and a respectable top five at Hever Castle against a field of seasoned heavy-hitters. He recounts how he weathered the autumn storms.

“After a year away, we – myself and Intrinsic FE director Chris Roberts – returned to Scotland to tame the beast that is Ben Nevis Braveheart Triathlon. I was excited to be defending my 2017 third place podium finish but also needed to exorcise some demons on the Ben.

“Fort William welcomed us with some traditional Highland weather: while the rest of the UK basked in balmy late summer temperatures and sunshine, we battled strong gusting winds and torrential rain. You know it’s serious when event organisers pull all competitors on police advice halfway through the bike to don hi-vis vests.

“Sitting in the race briefing the night before, organisers warned of the expected bad weather but remained determined for the event to go ahead safely. Little surprise then as race morning dawned wet, wild and windy and they announced a truncated route: a single swim lap shortened further still when the final buoy took off down the loch, and a run to just halfway up the Ben instead of the summit and back.

“Nevertheless, I do love a rough swim and was in my element as the wind funnelled down the loch and whipped up the waves. I exited the water in 2nd place and enjoyed a quick transition before cycling the first couple of miles whilst wrestling on my rain jacket no-handed in a howling gale. Not the smartest in the conditions, but ultimately incident-free.  The bike was difficult: although I went fairly well on the way out, the wind picked up after the turn and I spent a lot of time being blown across the carriageway, concentrating hard on keeping my weight over the front wheel. All in all, not a great experience.

“Rarely troubled by the call of nature during a triathlon, on this occasion 56 miles proved the exception to the rule. When you’ve got to go, you’ve got to go, but doing so cost me valuable places, dropping back to around 8th. Despite this, I managed a quick T2 and gained a couple of places heading out on the run.

“The hill run’s a tough one in the best of weather but on this occasion the challenging meteorological conditions combined with vivid memories of splitting my head open two years previously. So I ran up the Ben with gritted teeth and battled my mental demons on the fast descent to finish 4th overall in 04:10:42. I’m happy with that all things considered, but still have some unfinished business with Ben.

“A brief whiskey-fuelled r ‘n’ r and a few key sessions and I was ready for the Hever Castle finale of the UK triathlon season a fortnight later. Believe it or not, there are 29 options to this event. I’d entered the Middle Distance ‘Gauntlet’ comprising a 1,900 metre swim, 90km cycle and 21km run.

“In the immediate run-up to the event, organisers announced that ‘all disc wheels are banned, high winds expected’. A further message the day before the race warned of ‘heavy rain forecast at Hever Castle’ but that’s par for the course this season.

“So out came the wet weather gear (again) and a safer wheel choice. Arriving at the beautiful Hever Castle early on race day news came through of a delayed start and shortened 60km bike route because of standing water and debris on the road. Hanging around in the rain waiting for the gun wasn’t ideal, but on the plus side we wouldn’t be racing in the worst possible conditions.

“Hever’s Half Iron Gauntlet course starts with a brilliant single loop swim through the castle’s main lake and a tributary of the river Eden. I got into a nice little group of four who worked well together, breaking away from the main pack and chasing the leaders. Mentally celebrating a PB of 00:29:11 I literally strolled through the first transition: conditions underfoot forced organisers to neutralise the race for this section. The enforced deceleration was disconcerting and then I completely mess up by dropping my water bottle as I crossed the timing mat back onto live time.

When the going gets tough, the tough overtake

“Once on the bike I had three laps ahead of a 20km hilly circuit taking in the high weald of Kent and the Ashdown forest. I took the first lap easy as it was very wet under the tyres, but as the course dried a little I picked up the pace for the second lap. The circuit became ever more crowded so I pushed hard whenever I could to get clear road ahead and avoid getting caught behind cars. Despite being a shortened route, it was the first time I’ve genuinely enjoyed racing a middle distance on the bike. So much so that I’d definitely consider racing two consecutive middle distance events this close again – I had a lot more in my legs on the bike.

“Going into T2 I found myself in 8th again. I pushed hard out and onto the first 10.5km lap of the off-road run. It was pretty muddy and lonely and I completed the lap in 00:44:24 but wasn’t looking forward to the second loop. However, by now runners from the 10k, half marathon and Olympic distance races were also out on the course, which had two effects. The first was physical – it was very crowded and churned up the course into an absolute mud-fest. The second was mental – it felt so much easier to keep going with a constant stream of people to overtake, making it so much easier to keep going when things got tough.

Learning from the best

“After a modest sprint against an Olympic athlete I crossed the line in 03:54:35 and was bumped to 5th overall. I was very pleased considering the £1,000 prize purse had attracted a decent quality field of athletes. The fact that the slowest podium place was still a comfortable 12 minutes faster than me demonstrated a definite gulf in class. Race reviewed and I know how and where to get faster for next season. Now the bit is well and truly between my teeth for Minehead a week from now!”