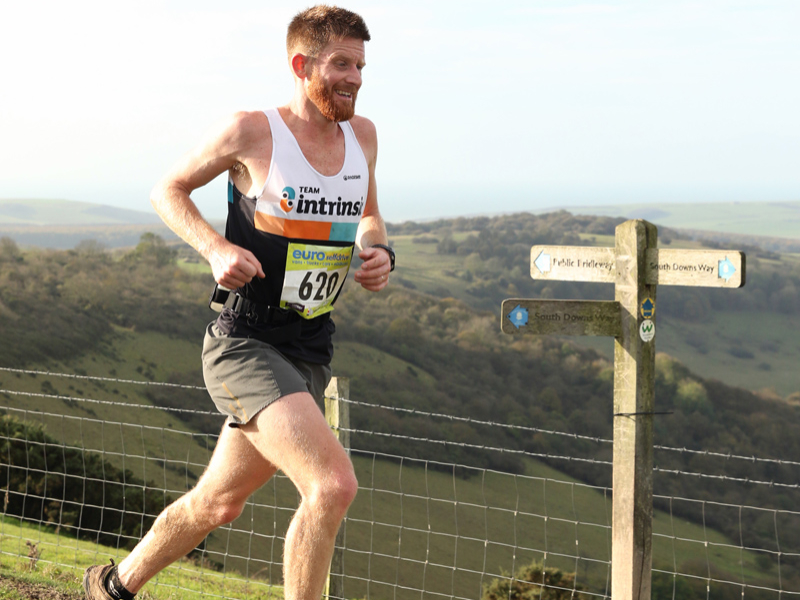 Posted on: November 1st, 2019 by Emma Knight No Comments

A self-confessed fish out of water over the marathon distance, Intrinsic-sponsored athlete Matthew Cox found his feet at the Beachy Head marathon and put in an end of season performance to be proud of. Matt completed the punishing 26.2 mile course in 03:13:16 running through from 10th at the halfway point to take fifth on the line in Eastbourne.

“Finally, I feel like the marathon distance is something that I can race.

“I’m writing this a few days post-race, still wearing the finishers smile on my face. Is it the result? Fifth place is good but I’ve always got ambitions of placing higher. Is it the time? Three hours and 13 minutes certainly gave my marathon demons a run for their money and I’m happy with that. But it’s my performance that I’m most proud of and the confidence the race will give me going forward.

“My previous marathon experiences have pretty much all followed a distinct trend – run the first half too hard then suffer from mile 20 onwards. Beachy Head 2014, Bristol 2 Bath 2015, Snowdonia 2018 all followed this script and have resulted in tears, St Johns Ambulance, more tears, capitulations and even more tears.

“So this time I was determined not to let history repeat itself. I did my best to run within myself over the first half marathon, relaxed into it after the first mile and allowed runners to come past me without giving chase.

“As we dropped into Alfriston at mile eight my wife and family were there to cheer me on. In all honesty, I wasn’t feeling great at this point but I stuck to the plan. I didn’t start feeling good until mile 10, running across the top of the stunning South Downs. From this vantage point I realised that despite being in 10th I could see ahead to sixth place all within 2-3 minutes of my own position. So I began to relax and the internal doubts – you’re not marathon fit, you’re not running fast enough, you’re not good enough – finally eased.

“The runners ahead of me came within reach as I approached halfway and I passed the 13-mile marker in 1hr 35 minutes slowly picking up the effort. By the time I reached Exceat at 18 miles I’d moved up into seventh having put significant time into the rivals I’d overtaken. Furthermore, I could see the two runners ahead of me and decided to go for it, do or die!

“Heading towards Birling Gap at mile 20 I was battling fifth place with local legend Stuart Mills, so I timed my move as we began the climb up Beachy Head. The last two miles of the course were among the hardest I’ve ever run. Convinced that Stuart would overtake me on the descent into Eastbourne, my last mile was my second fastest – and  the most painful ever. Only as I came off the South Downs to the sound of cheering crowds did I risk a backward glance before slowing to a jog and soaking up the finish.

“Those that are familiar with my racing style know I don’t leave much of myself out on the course so I was totally destroyed by the end. Notwithstanding, I’m super proud of getting to grips with the marathon distance and finally laying those demons to rest, especially fitting at an end of season home race for Team Intrinsic sponsor Intrinsic Facilities Engineering.”