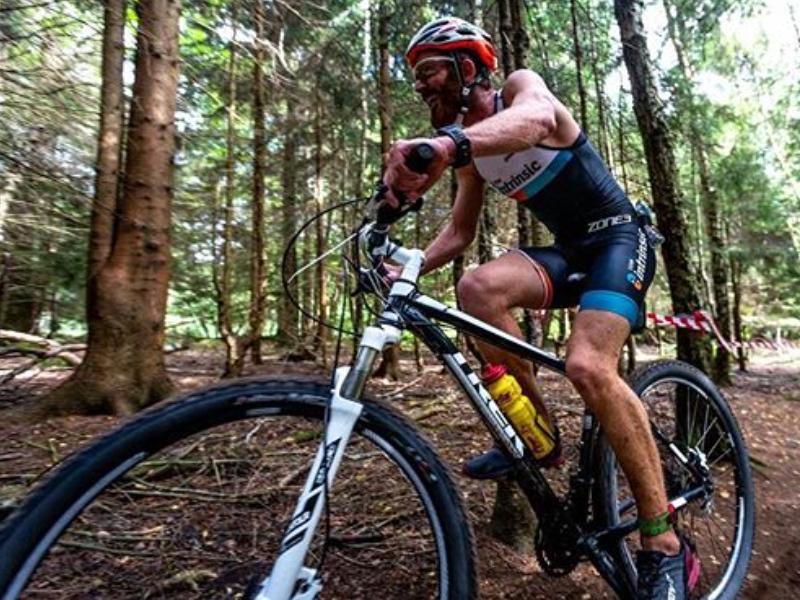 Posted on: September 21st, 2018 by Emma Knight No Comments

We catch up with Matthew Cox, ebullient triathlete for Team Intrinsic, as he takes a brief pause in competition to support wife Laura Gallagher’s defence of her title as British Trampoline Champion, and reflect on success in his first competitive off-road cross-tri.

“Joining fellow Intrinsic teammate and Intrinsic Facilities Engineering MD Chris Roberts for the epic Breca Buttermere SwimRun in late summer completely re-invigorated me: doing something different and not merely racing for the win but to enjoy a great day out surrounded by some spectacular scenery got me buzzing to finish the season strong.

“But post-event fatigue forced me to put head before heart and settle for an interim recovery missing out on this year’s South West Regional Championships a week later.

“Batteries recharged, the awesomeness of Buttermere had me fired up to get back racing triathlon. As a west-country boy, I’ve had the Minehead Triathlon in my head for this year’s season finisher. The event didn’t run in 2017, so as soon as my Dad and brother pinned their colours to the mast, I’d booked it. I’m really looking forward to ending the season with those two, some decent support and hopefully a good result.

“Autumn brought with it a chance for me to get stuck into an exhilarating new challenge: an old college pal and XTerra pro-cross triathlete Doug Hall was bringing off-road cross triathlon back to England, and I couldn’t resist getting involved. So, with a borrowed cross-country MTB (thanks Dad!) I got some last-minute trails riding in before heading across to Pippingford Park in East Sussex for what proved to be a spectacular event in an equally stunning location.

“The inaugural TrailX Cross Triathlon course, organised by Eventrex Sport Events, featured a ‘point-to-point’, three-lake ‘uphill’ swim, followed by a mountain bike and run course packed with challenging climbs and fun descents. I’d gone for the ‘Full Fat’ standard distance and after an amazing swim – which felt like an adventure in its’ own right, swimming along rivers and in and out of lakes – I threw myself into the technical rolling bike course.

“Suffice it to say, fitness took me only so far – my bike handling skills clearly needed more work and I found myself going backwards through the field, albeit grinning from ear to ear! The run was where it was at with me allowing me to gain back most of my places from the bike to finish a satisfying 6th overall just behind multi-sport legend and 7-time world champion, Richard Stannard.

“Chuffed with the result and keen to do more in the future, I plan to pick the brains of Doug, Richard and others (mainly vis-à-vis bike skills and tech) and looking at the cross-country calendar in preparation for 2019.

“In the meantime, its back to familiar territory with the Mumbles Middle Distance Triathlon later this month, followed by some exciting running races/challenges to finish the season. Oh yes, and blagging an entry to the Snowdonia Marathon Eryri and a 12-hour ultra beyond that.

Taking a back seat to support British trampoline title defence

“For now though I’m putting all that on the back burner to support my wife, Laura Gallagher, as she defends her British Trampoline Champion title at the Trampoline, Tumbling and DMT British Championships in Birmingham (22-23 September).

“Feet firmly planted, I’ll be a complete nervous wreck watching from the side lines as Laura bounces high as a house whilst performing multiple, complex somersaults: it reminds me why I picked an easier sport!”

Good Luck Laura from all of Team Intrinsic – you’ve got this!

Matt will be competing in the Middle Distance event against the spectacular setting of Mumbles. This half ironman distance comprises a 1.2 mile ocean swim, 56 mile bike and 13.1 mile run.

Matt plans to compete in MTB, SwimRun and Trail Run events at this annual festival organised by the National Trust and its partners.

The event didn’t happen in 2017 but is back with a vengeance in 2018. Previously a sprint triathlon it will now utilise its coastal location with a 750m mass start open water sea swim; a fast, undulating out and back bike route on stunning roads flanked by the high moorland terrain of Exmoor National Park; 5km run route comprising a mix of flat paved seafront promenade and off-road trails within the woods of Culver Cliff finishing with an uphill sting in the tail.

Billed by organisers as one of the UK’s toughest and most beautiful marathons, the iconic Snowdonia Marathon Eryri has been voted best British marathon twice. Its demanding and spectacular route encircles Snowdon, the highest peak in Wales and England. Matt will be one of 2,700 competitors on the course.